Everyone’s favourite toy turns 60 this year! Sunday, 28th January 2018, marks the 60th anniversary of the patent approval for the form of the Lego brick that we know and love playing with today. To celebrate this great achievement (and because we need little excuse to party) we’ve made our own Lego brick – fixing the only downside to Lego (it’s made of plastic – boo!) by making ours out of a far more environmentally-friendly material… Cake. Yes, it’s a giant Lego brick cake – Yum!
Read on to find out how to whip up a Lego brick cake yourself – it’s so easy, you can do this even if you’re an absolute baking beginner.

This impressive-looking cake is a doddle to make!

I freely admit that I’m not a frequent maker of novelty cakes – mostly because my home baking tends to taste better than it looks and most of those fancy-pants, Pinterest-worthy cakes are way out of my ability league. But a Lego brick is just a rectangular cube with a few studs on top. How hard could that be? No seriously, not that hard, right? Right! In fact, it’s easy peasy – and you can make one too. 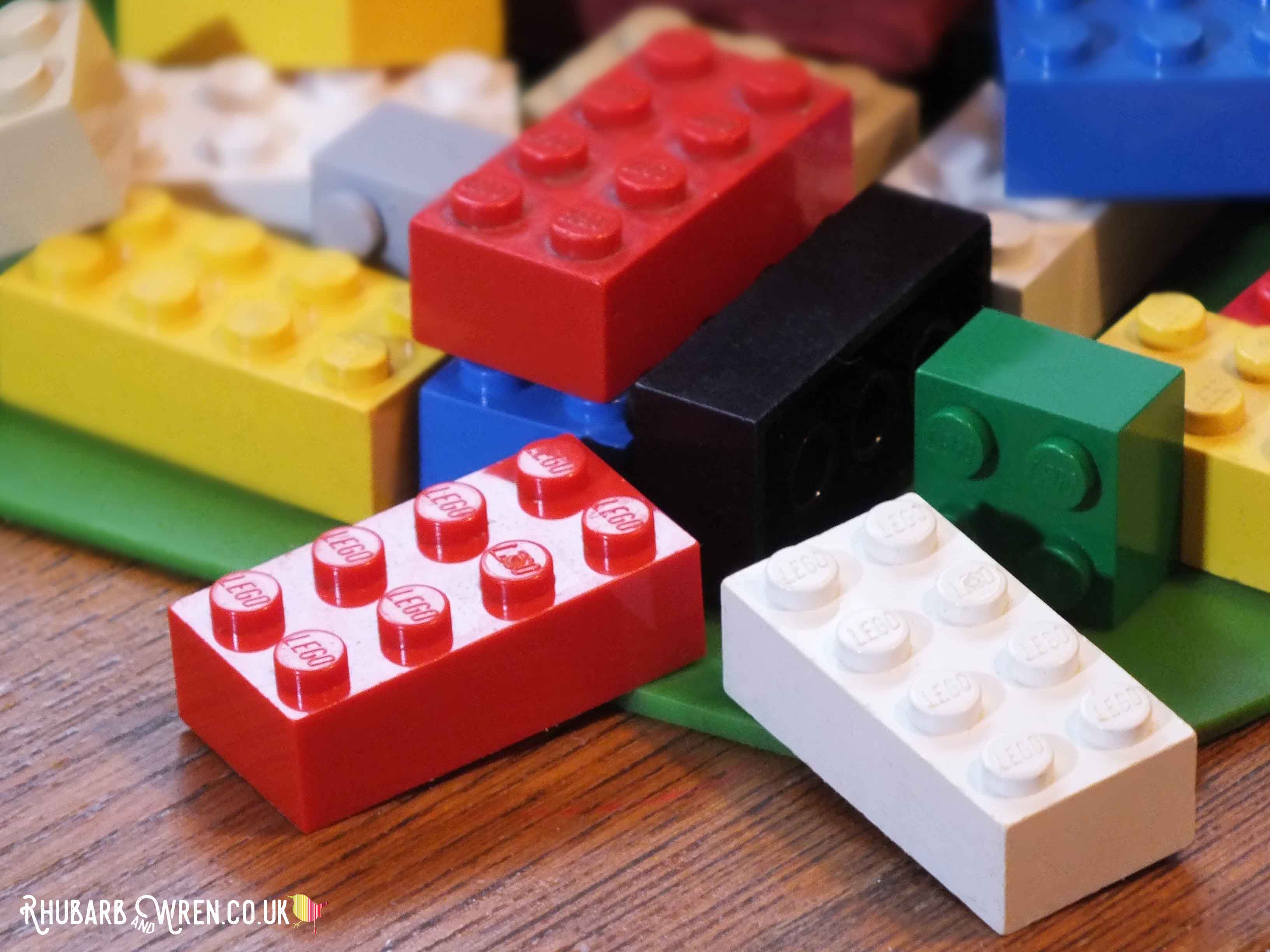 Lego bricks – the inspiration for our cake

Before we begin, a quick word on the cake itself. You could use any recipe to make a LEGO Brick cake as long as you bake it in a rectangular tin – it’s going to be completely covered in icing so if you want chocolate cake or lemon, it doesn’t make any difference. We went with a classic Victoria sponge cake recipe – it’s a family favourite and firm enough to hold the shape well (at least when I make it!). The other benefit of this recipe is that it uses only four readily available ingredients (not counting filling and/or icing) and it’s so quick and simple that my children can and do make this all by themselves.

For this cake, I used my (affiliate link alert!) mega-huge square cake tin that has dividers to create all sorts of square and rectangles in all sorts of sizes. As I’m rubbish at judging sizes (ahem) I may have ‘accidentally’ made a rather humongous cake that swallowed up all my cake mix so easily that I had to go back and make another batch to top it up. I used eight eggs in the end! Like I said, HUGE cake.

The recipe quantities here are based on the assumption that you are being more modest/sensible, and using a rectangular tin of around 9” capacity. It’s a very easy recipe to alter as quantities are based on the weight of the eggs, so if you need it a bit bigger then just add another egg or two (before you start mixing!) and increase all other ingredients to the new weight as well. 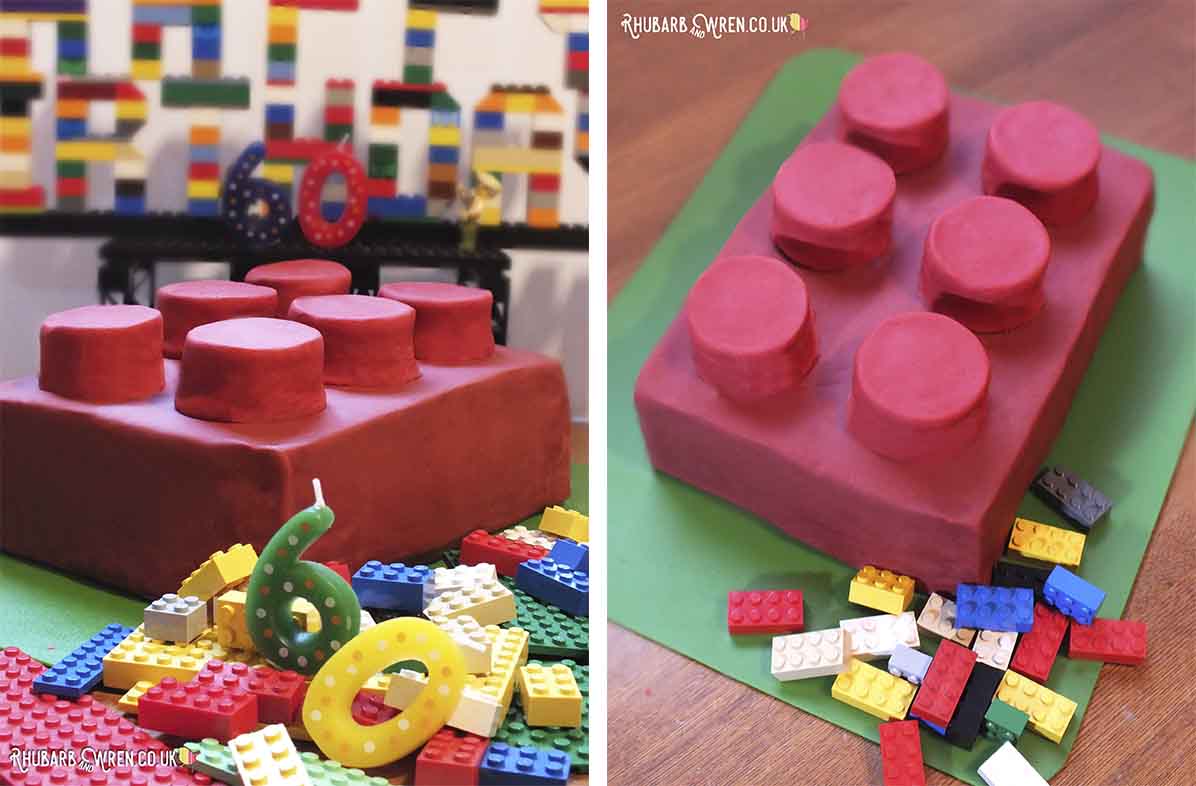 Celebrating 60 years of Lego with the mighty Lego Brick cake.

To make the cake:

To decorate and finish:

Cut out mini sponge circles for the studs on top of your cake-brick. 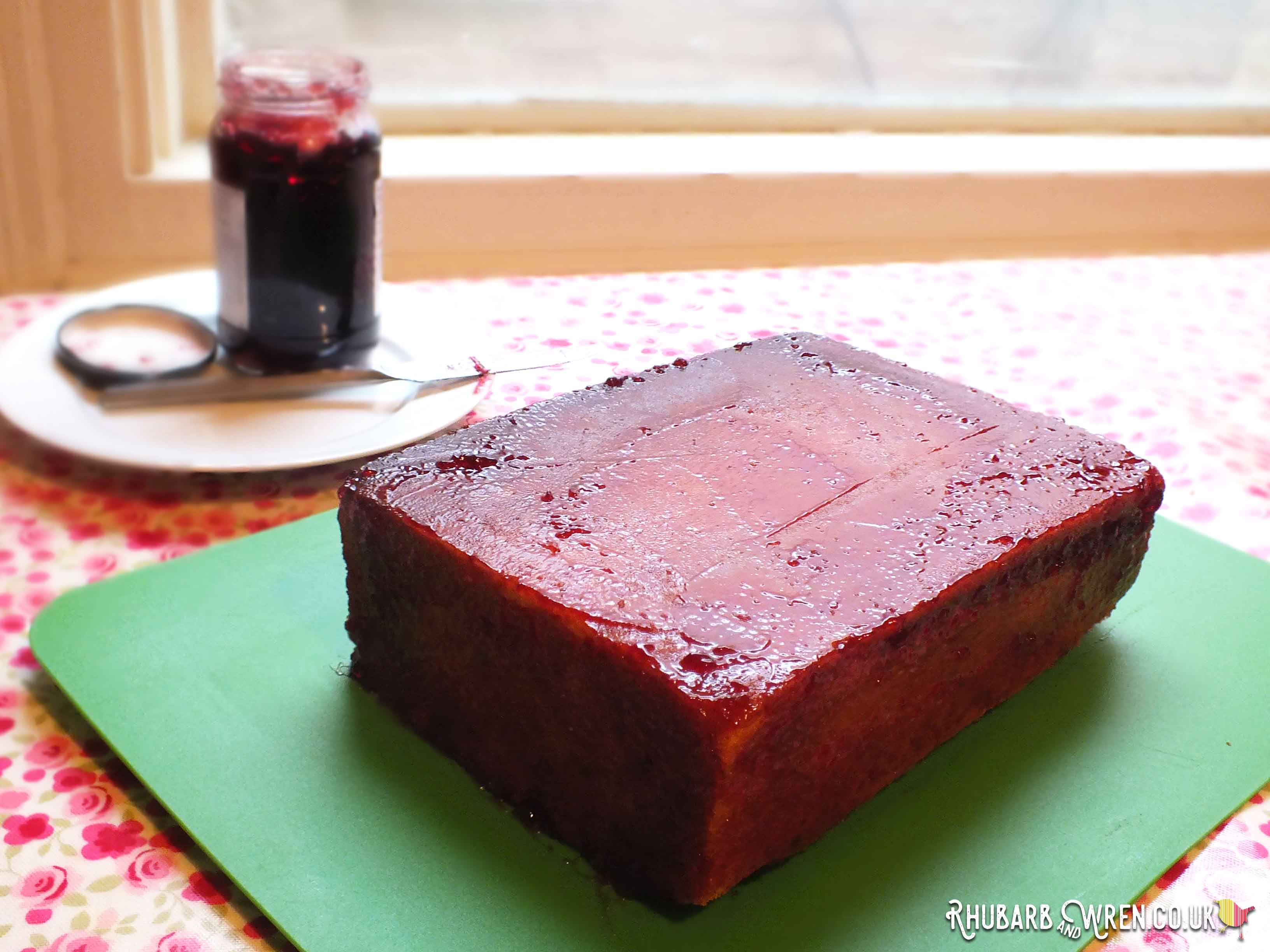 This is going to be a Lego brick cake, honest. 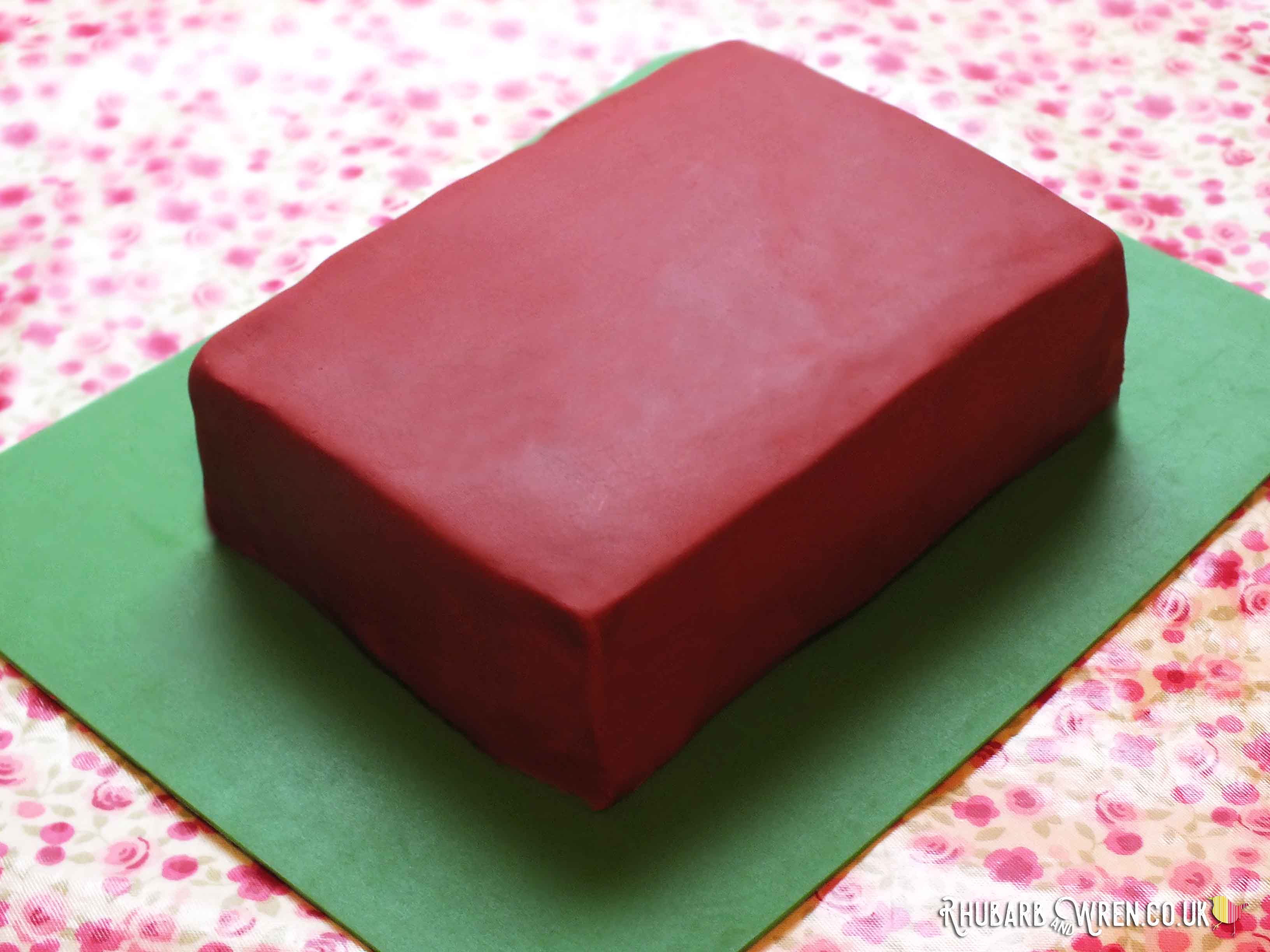 Starting to look brick-like, if not quite a Lego brick cake yet! 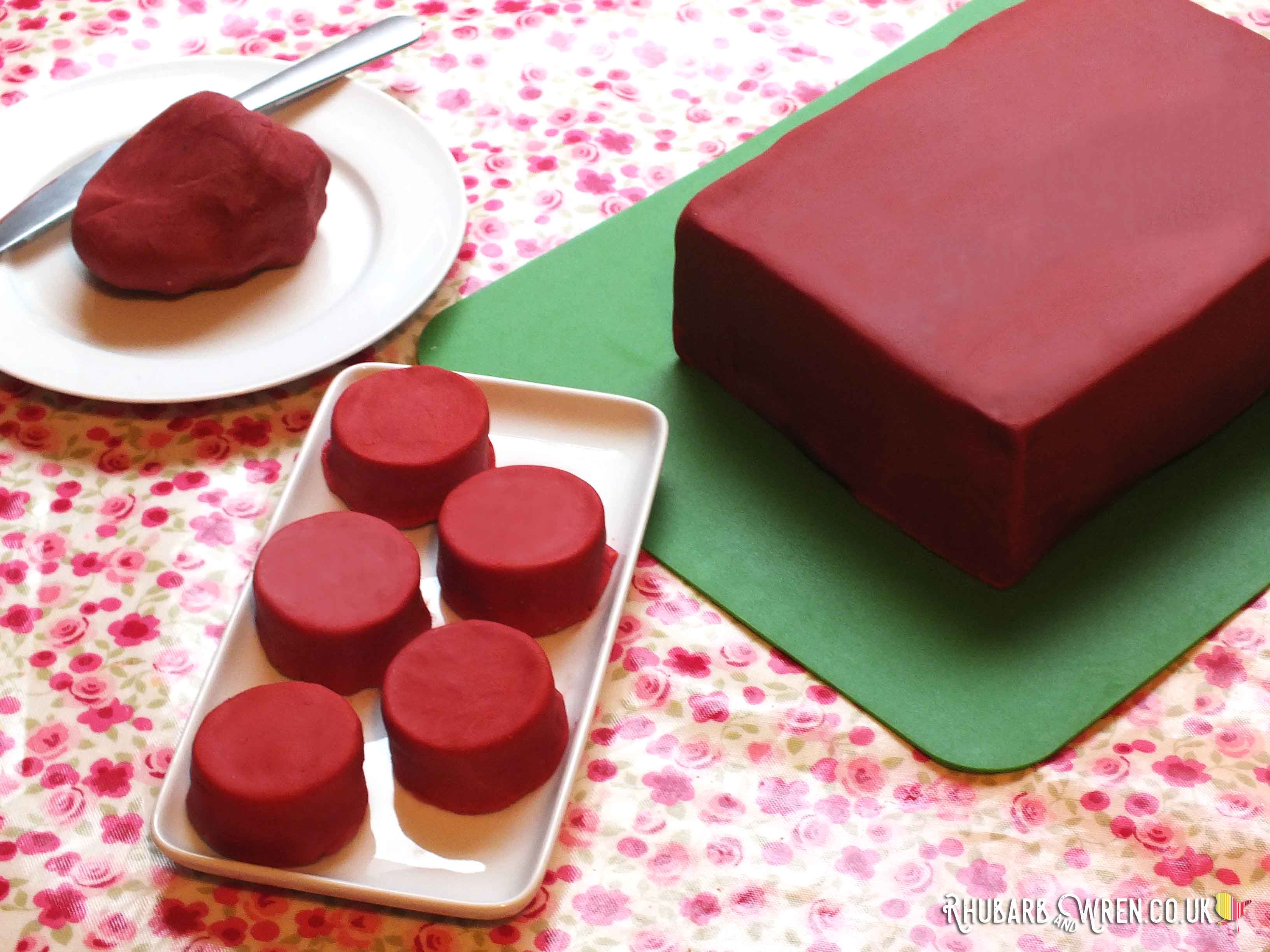 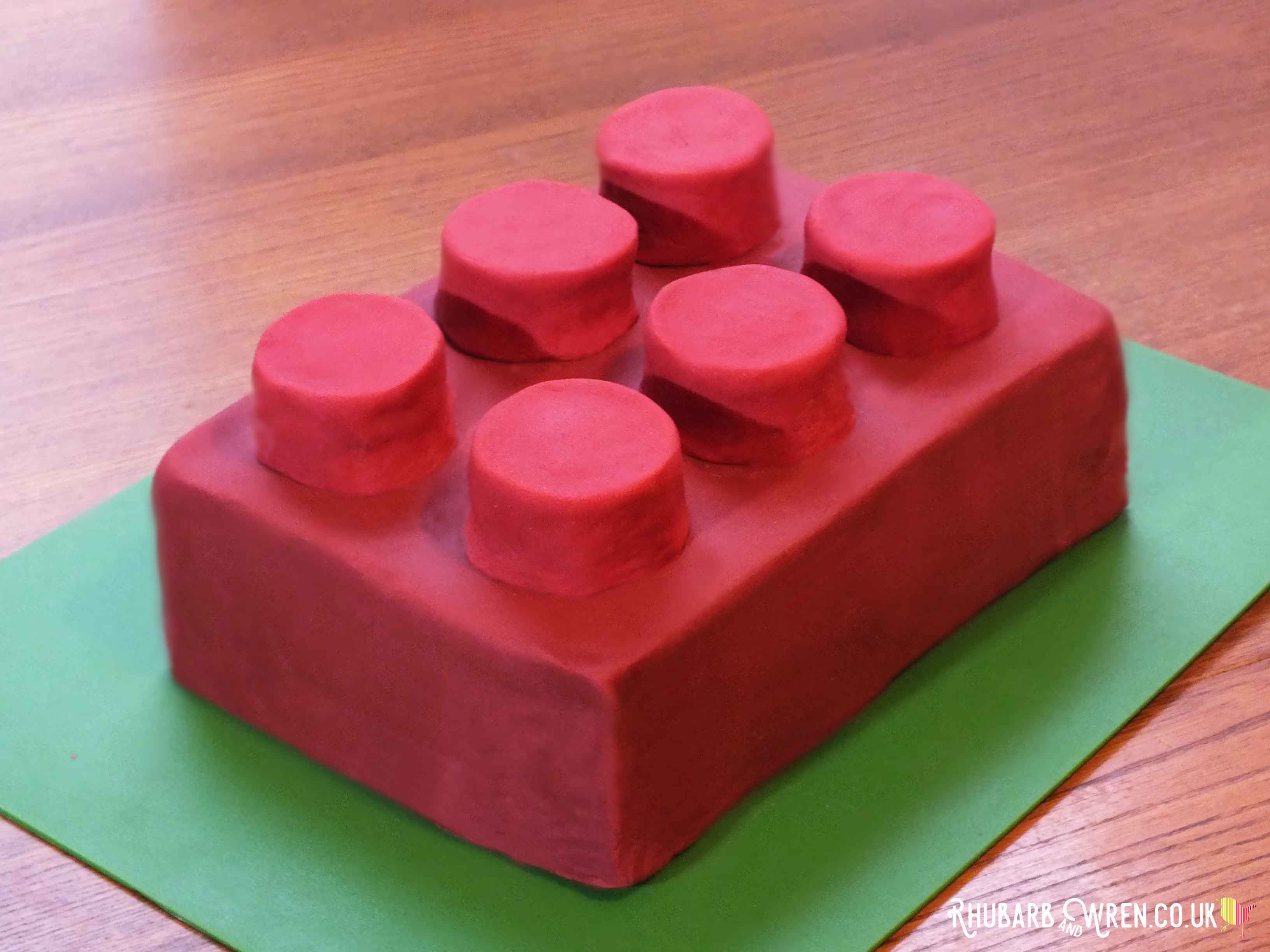 The kids and I had great fun making this Lego brick cake – there’s no doubt that fondant icing can be a little fiddly to apply (especially on a big cake), but actually it wasn’t as hard as I thought it would be to get a decent-enough-for-the-kids finish. So if you can roll out play dough, you can certainly tackle this too. And while mine won’t win any cake decorating awards (and would most likely be rejected by Lego’s quality control for its wildly inaccurate measurements), this Lego brick cake looks effective enough to please my kids and make them smile. It is also rather tasty. 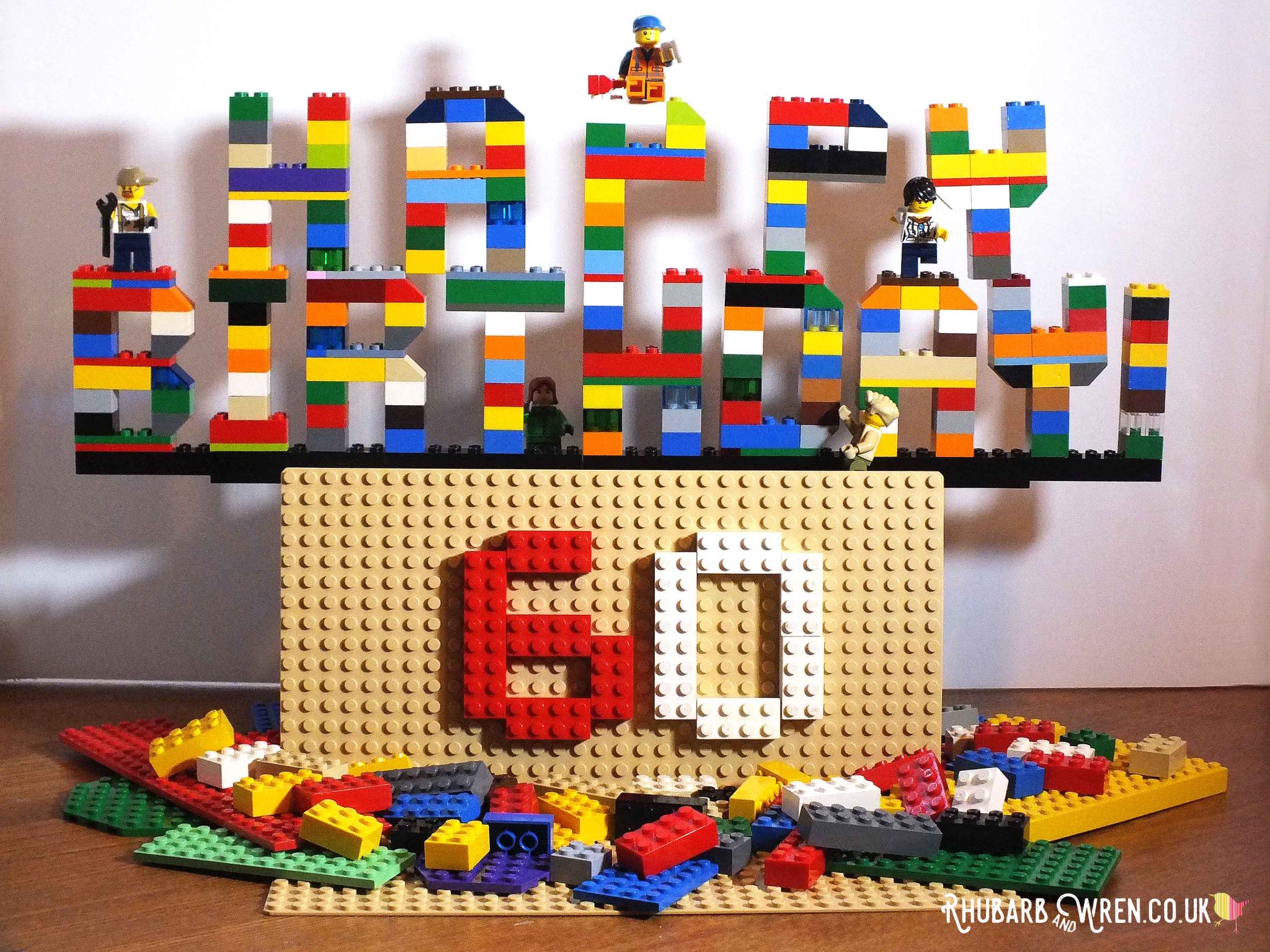 Happy Birthday Brick! 60 years of Lego and a lot of sore parent feet…

If you are looking to make a Lego brick cake yourself, the main things you’ll need are a rectangular cake tin and some circle cutters, though a fondant smoothing tool is a useful extra as well. These (affiliate links) are similar to the ones I have – and I’ve my eye on those fabulous Lego silicone moulds too – just think of the possibilities…

Circle cutters for the studs

As part of their 60th Anniversary celebrations, Lego have released these special limited edition sets, with the theme ‘Building Bigger Thinking’. Rather than having a specific design to build, these sets encourage more imaginative and open-ended play by providing a range of blocks and some starting idea instructions. I love the look of these and it’s great to see that they cover a range of budgets, from the pocket-money friendly £4.99 to the birthday busting £44.99 (still far from the most expensive Lego set around though). I’m pretty sure that one or two of these will end up in the Rhubarb and Wren nest before too long!

More from Rhubarb and Wren

Looking for more cakey goodness? Check out my other easy-peasy cake recipes here!

For when the classic needs mixing up! 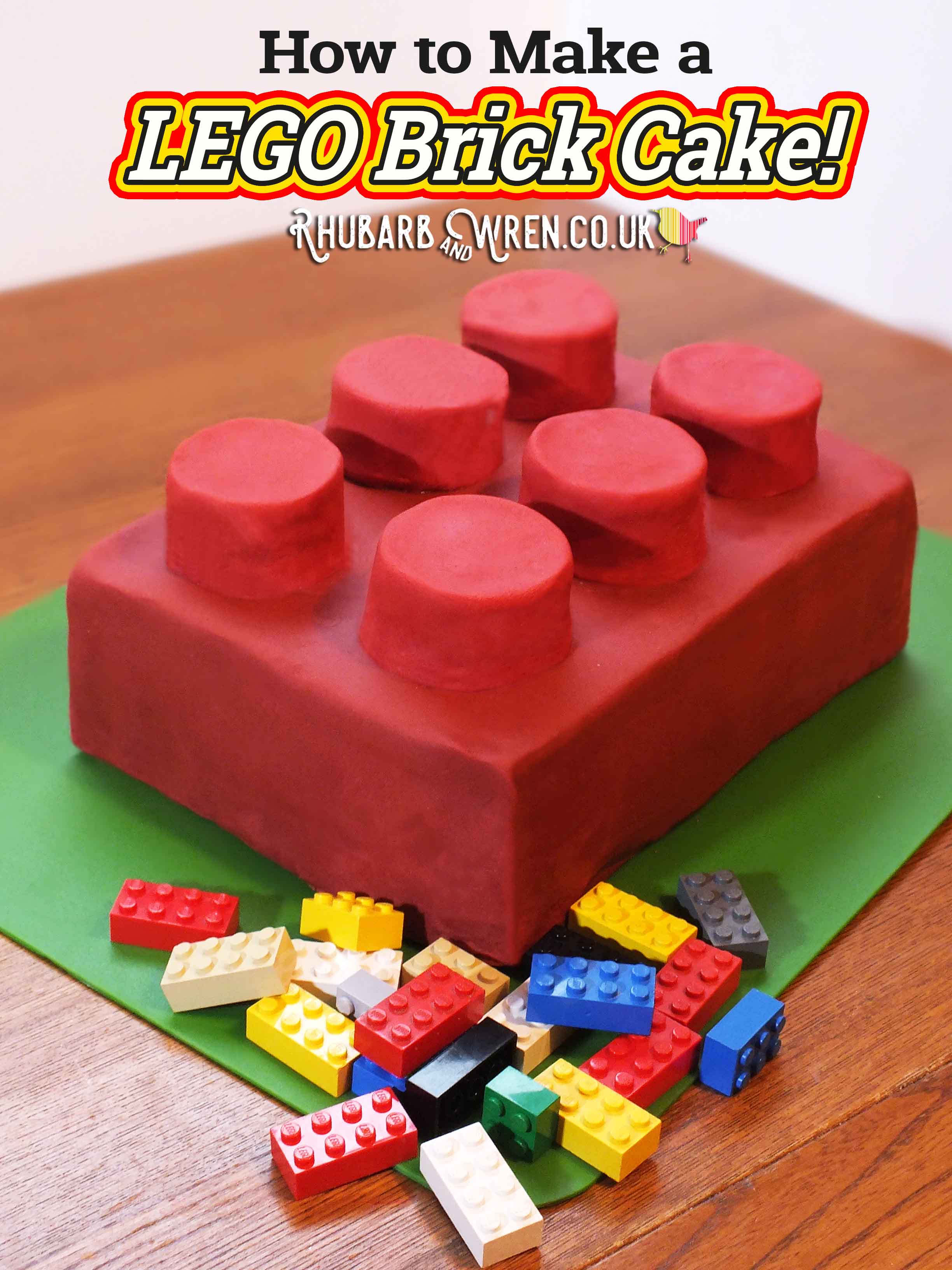 This giant Lego Brick Cake was so easy to make, even absolute beginners cake do it! 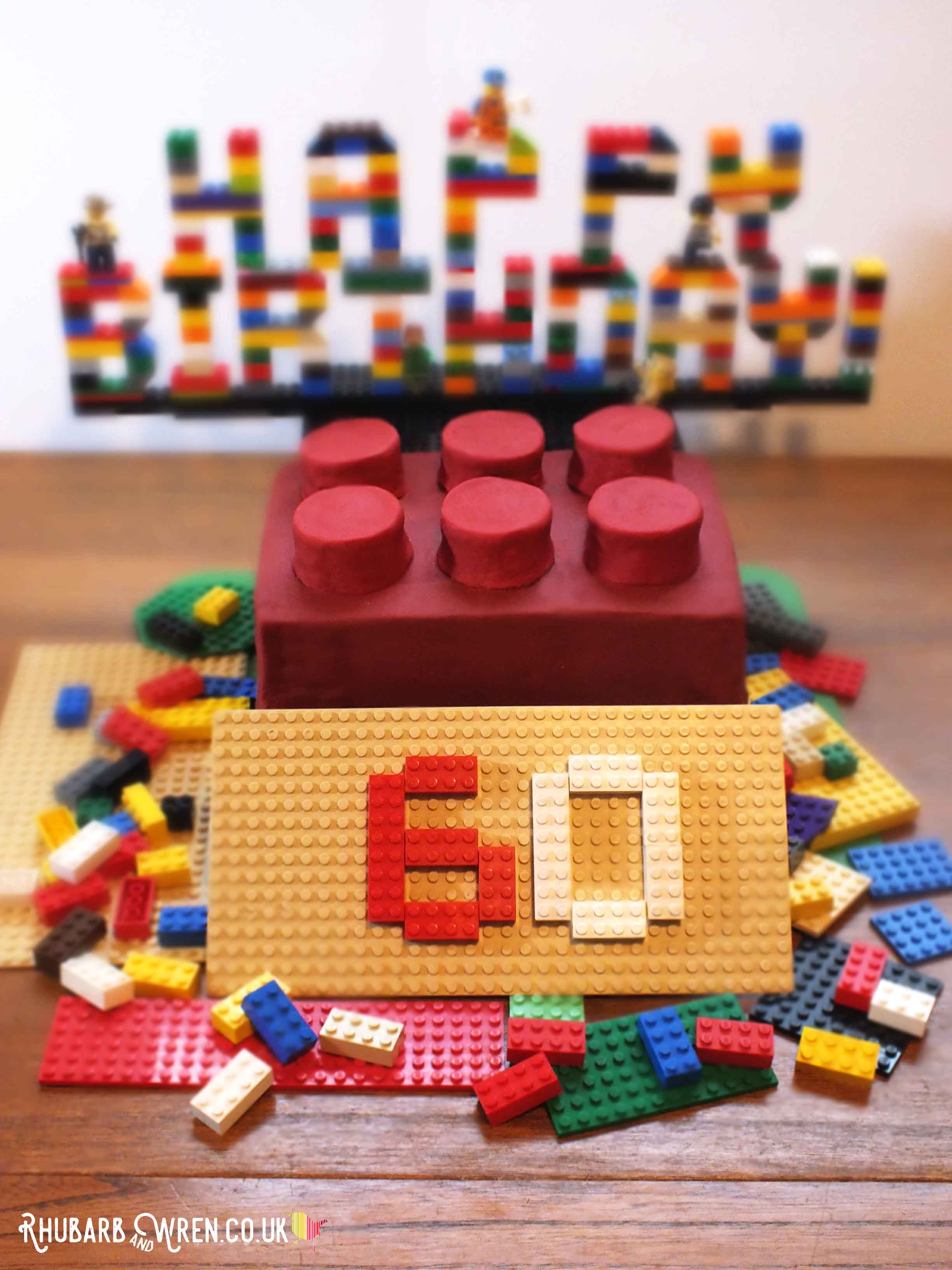 Say it with cake… and Lego… Happy Birthday! 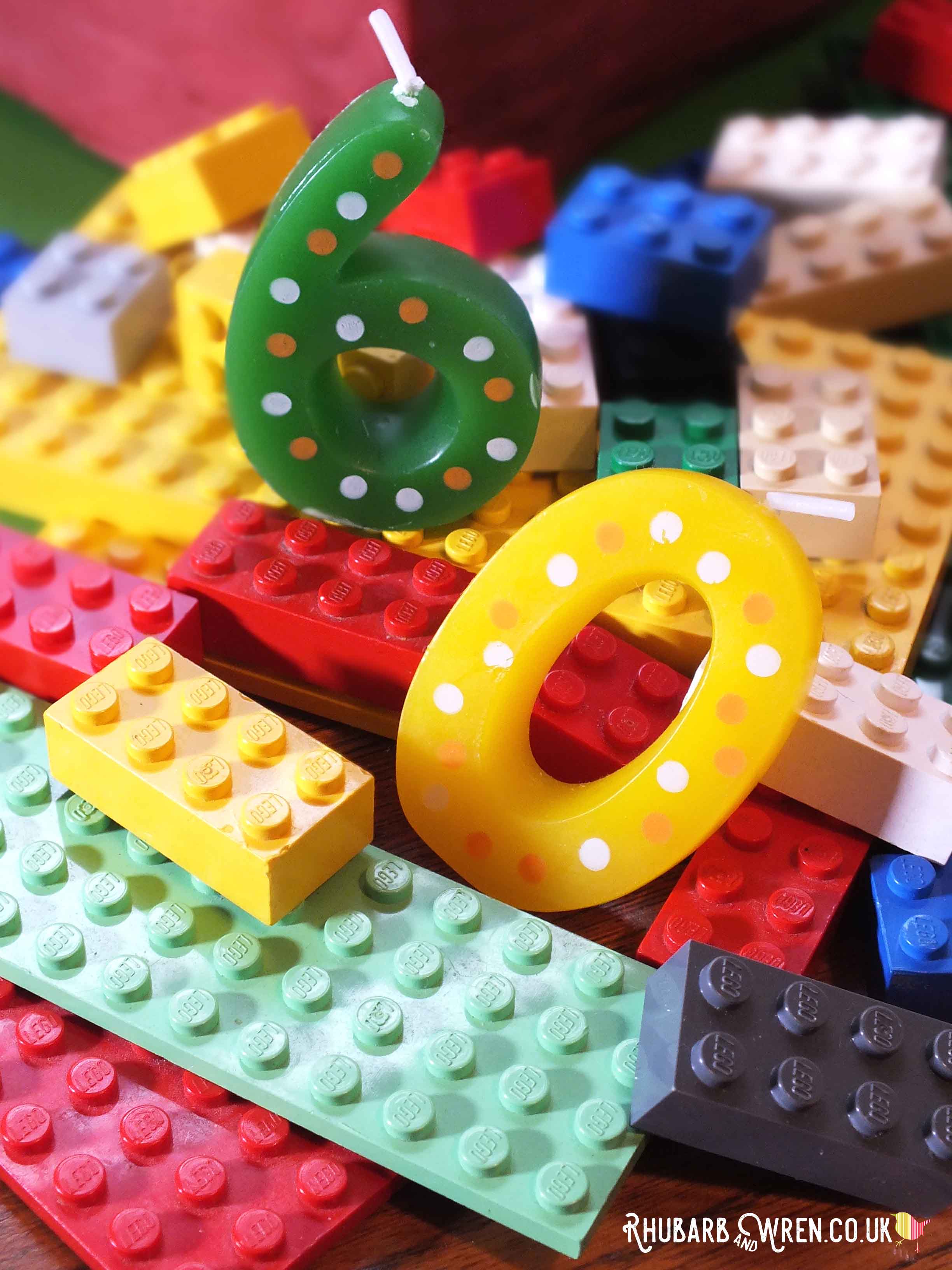 60 years of the Lego Brick!